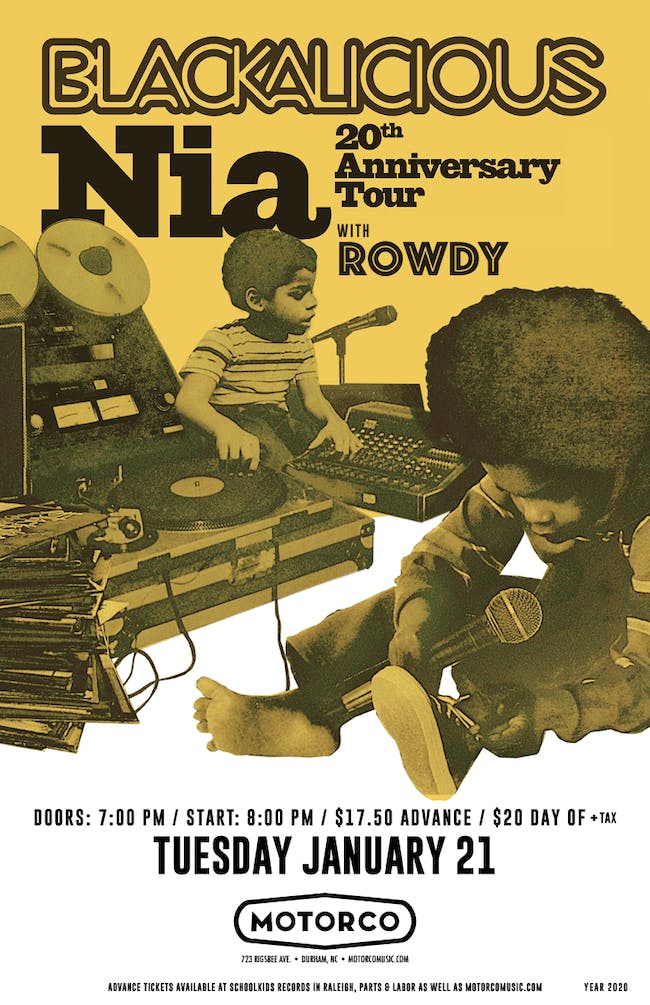 "Each one of these records is a chapter in our lives, and we put our complete heart and soul into it," agrees Gab's longtime musical partner, CJ/producer Chief Xcel (aka Xavier Mosley). "We live these records."

Imani, Vol. 1 lives up to the beloved California-bred duo's hard-won reputation as one of hip-hop's most progressive, forward-thinking creative forces. Acclaimed for the sublime combination of Gab's verbal dexterity and lyrical eloquence, and X's bracing beats and distinctive soundscapes, Blackalicious has earned widespread respect, both inside and outside of the hip-hop community, for the wildly inventive, personally charged innovations of its first three albums, 1999's Nia, 2002's Blazing Arrow and 2005's The Craft.

Three years in the making, Imani, Vol. 1—the first of a projected trilogy to be released over the course of two years—is perhaps Blackalicious' most ambitious and accomplished effort to date, maintaining the spirituality, introspection and positivity that are the twosome's trademarks, while making it clear that their musical vision and creative drive remain as strong as ever.

Although Imani, Vol. 1 is driven by Gift of Gab's uplifting verbal sophistication and Chief Xcel's expansive sonic sensibility, which are as distinctive as ever on such riveting tracks as "On Fire Tonight," "Escape," The Sun," "We Did It Again" and the epic "Alpha and Omega."

The pair is joined by such guest performers as Afro-pop diva Zap Mama, who's featured on the title track; Amde Hamilton of legendary '60s rap progenitors the Watts Prophets on the album-opener "Faith," eclectic singer-songwriter Imani Coppola on "The Sun," underground hip-hop duo LifeSavas on "That Night," neo-blues auteur Fantastic Negrito on "Love's Gonna Save the Day," Myron of retro-soulsters Myron & E on "On Fire Tonight," and the all-star hip-hop combo of Lateef, Lyrics Born, Monophonics and DJ D Sharp on "Alpha and Omega."

Imani—whose title is the Swahili word for "faith"—is a particularly personal project for Blackalicious, with its title reflecting the personal trials that helped to inspire the words and music.

"Faith has been a big word in both of our lives in the last couple of years," Gift of Gab affirms. "We both dealt with some personal situations that really required faith and forced us to think about a lot of things. Most of our albums are about where we are at that point in our lives, and that's definitely true on this one."

"My kidneys failed at the top of 2012, when we were gearing up to do this record," Gift of Gab notes. "I got put on dialysis, so now when I travel or go on tour, I do dialysis wherever I go. When I got the news, there was a moment where it was a little dark, where I was questioning if I'm still gonna be able to do this. But then I had the realization that no one can ever take my creativity away. I realized that this is a circumstance that I'm temporarily gonna be dealing with, and that I have to make some adjustments for it, but that it doesn't stop me from being a creative person. Once I realized that, I started to feel inspired and just threw myself into writing, and that became a big part of the fuel for this record."

Although it's been a decade since the last Blackalicious release, the pair has remained busy with a variety of musical endeavors. Gift of Gab released three solo albums, 2004's 4th Dimension Rocketships Going Up, 2009's Escape 2 Mars and 2012's The Next Logical Progression. Chief Xcel worked with acclaimed soul singer Ledisi, and formed Burning House with R.V. Salters of General Eletriks, releasing the 2013 album Walking Into A Burning House.

"Blackalicious never stopped," asserts Gift of Gab. "We just wanted to explore other things as individuals, and in 2012 we realized that it was time to return to the mothership. I was a little nervous at first, and thought that it might take some time to rebuild. But when we started doing shows, we were selling out everywhere, and people were telling us that they grew up on our music. It was encouraging to find out that, even after all these years, we're actually important to people.

"It's like traveling," Gab continues. "It's always good to travel and see the world. But then when you come back home, you appreciate it that much more. We stepped right back into it, and it was like 'Oh yeah, I remember this. This is home.'"

"Once we got into the studio," Chief Xcel recalls, "everything flowed very naturally. We just got in there and kind of let the album make itself. When we were in the studio together, it was pretty effortless, because we know each other so well creatively. We wrote about 60 songs for this record, and went with the ones that we felt strongest about. And about 90 per cent of it is live tracks; it's probably the fewest samples I've ever used on a record."

"We're like two kids who've been playing basketball together since the second grade, and now they're in the NBA so

they really know each other and can anticipate each other's next move," Chief Xcel says of his and Gab's enduring partnership. "It's totally instinctive, and we kind of communicate without talking. I know just from his physical reaction, when he hears a beat or a song, if there's a spark or if he feels inspired. And vice versa; he can tell by my immediate reaction if we've hit the mark or not. That just comes from time."

With Imani, Vol. 1 demonstrating that Blackalicious is as potent a creative entity as ever, Gift of Gab and Chief Xcel are

embracing their return to the spotlight, and looking forward to reconnecting with their loyal, demographically diverse fan base.

"I think that this album is coming from a very honest place, and I really think that this is the most creative and prolific point of our careers, so we're really excited about it," Chief Xcel says, adding, "The next year or two, it's gonna be a nonstop balance of touring and being in the studio working on Volumes 2 and 3. We're definitely looking forward to seeing how things evolve and change."

"In my opinion, this is one of our best records," Gift of Gab agrees. "It's been a long time, we worked hard on it, and I

hope that people enjoy it. People will come up to us and say 'Yo, that record changed my life' or 'That record helped me

to get sober' or 'That record started me on a spiritual journey.' People say personal stuff like that, and we take it seriously."

"Our audience seems to be people who see music and art as essential parts of life, and not just disposable accessories,"

Chief Xcel concludes. "That's who we make music for—people who need music in their life. I'm one of those people.

Imani is Swahili for faith, and that's really where we're at at this juncture. We're so rooted in our purpose that we don't have to second-guess, we just know. There's no fear of the unknown, there's just the fire to move forward and get to wherever the journey takes us."

Kevin “Rowdy” Rowsey is a National Recording Artist, Writer, Actor, and Educator based in the North Carolina Triangle Area. Rowdy has been featured on BET, NPR, PBS Kids, and has given a TEDX talk on the importance of Hip Hop Culture. Rowsey is a U.S. Hip Hop Ambassador through the U.S. Department of State and the Next Level Hip Hop Program. On stage Rowsey is part of the national collective No9to5 Music, and plays with a live Jazz Band (J) Rowdy & The Night Shift which was nominated for a 2017 Carolina Music Award. They’ve been able to share the stage with the likes of Rakim, Busta Rhymes, Ari Lennox, Childish Major, Snow Tha Product, Murs, 2 Chainz, Juicy J, and a plethora of other national recording acts. Currently Rowdy is the founder of two triangle area cyphers – The UNC Cypher (UNC-CH) and the Med City Cypher (Downtown Durham). He also holds the position of Program Director at the Downtown Durham – Afrofuturist Teen Center Blackspace. Through UNC Greensboro’s Masters of Arts in Teaching Program Rowsey continues his mission to spread southern hip hop at a national and international level through performance, writing and educational workshops inspiring the culture through the craft.