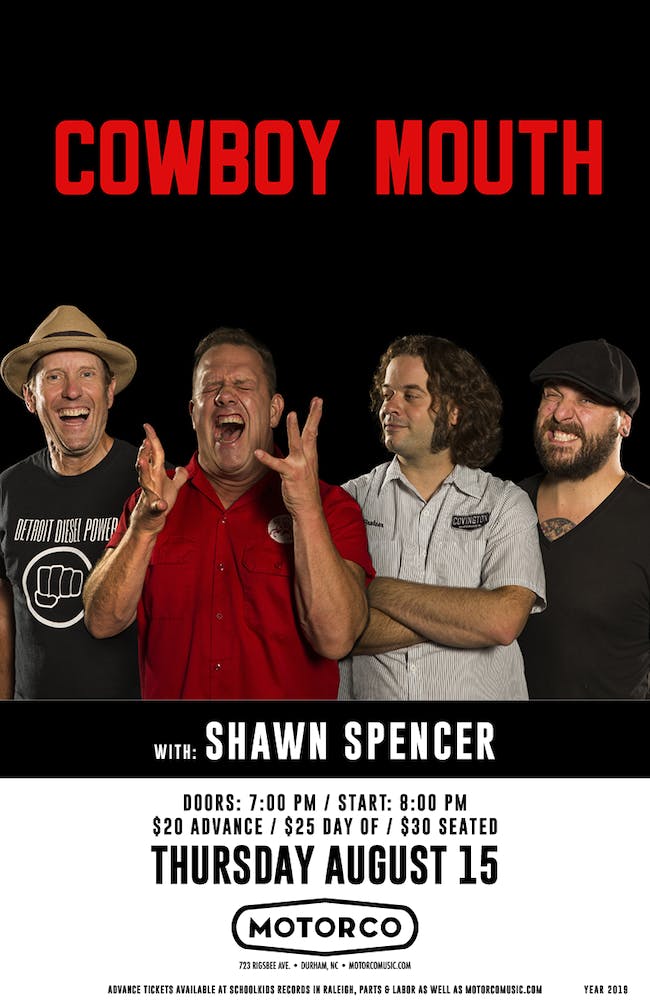 For Cowboy Mouth, the road goes on forever.

Now approaching their third decade together, the New Orleans-based rockers continue to cement their reputation as celebratory, electrifying road warriors. They've played more than 3,000 shows to over 10 million fans, mixing the party-friendly punch of their hometown — a city known for good times and even better music — with a raw, rock & roll foundation. From the opening guitar riff of the band's signature hit, "Jenny Says," to the furious percussion supplied by the group's drummer and larger-than-life front-man, Fred LeBlanc, Cowboy Mouth shows remain legendary.

"A Cowboy Mouth concert is like a Southern gospel revival without the religion," says LeBlanc, who helped form the band in 1990. Nearly 30 years later, Cowboy Mouth continue to do their best work on-stage, supplying their nightly congregation of rock & roll sinners and holy rollers— from the 100,000 people who watched the band open for Aerosmith at Jazz Fest 2018, to the densely-packed audiences that have filled the band's club and theater shows for decades — with a reminder that rock & roll music doesn't just swagger, sweat, and stomp. It saves.

Back in the 1990s, when rock was king and record labels were loaded, Cowboy Mouth released hit songs for MCA Records and Atlantic Records. MTV loved the guys. The radio loved them, too, with "Jenny Says" charging up the Top 40 hit on multiple Billboard charts. Even so, it was the band's touring schedule and live show that truly set them apart. When the recording industry took a nosedive during the 2000s, Cowboy Mouth continued flying high, creating an even tighter bond with their audience by releasing music on their own. They didn't need help from any record execs. After all, it was the band's fan base that had always supported Cowboy Mouth…and today, it's still the high-energy live show that keeps the crowds coming back.

That live show will receive new fuel in 2019, when Cowboy Mouth releases an EP of original songs loaded with the same in-your-face, amplified attack that launched the band's career years ago. Joining Fred LeBlanc on the new record is the band's longtime guitarist John Thomas Griffith, who fronted the nationally-acclaimed group Red Rockers (and sang on their early-1980s MTV staple, "China") before join-ing Cowboy Mouth's original lineup. Also featuring bassist Brian Broussard and guitarist Matt Jones, Cowboy Mouth's roster is stronger than ever: a lineup of four rock & roll veterans, all working together to stir the band's unique gumbo of pop, Big Easy blues, soul, punk, and redemptive rock & roll.

"What we provide isn't just musical entertainment," LeBlanc explains. "It's an experience. We're con-stantly looking to top ourselves, because that's just who we are. We're galvanizers. We're a bit hyper-bolic. We're Cowboy Mouth."

Cake Magazine said it best: "On a bad night, they will blow the roof of the place. On a good night, Cow-boy Mouth will save your soul."

With Spencer's knack for big choruses with powerful lyrics and Hume's history of hard-hitting mixes, the album, entitled Empty Seas, comes out edgy but with that sing-ability that pop music craves.