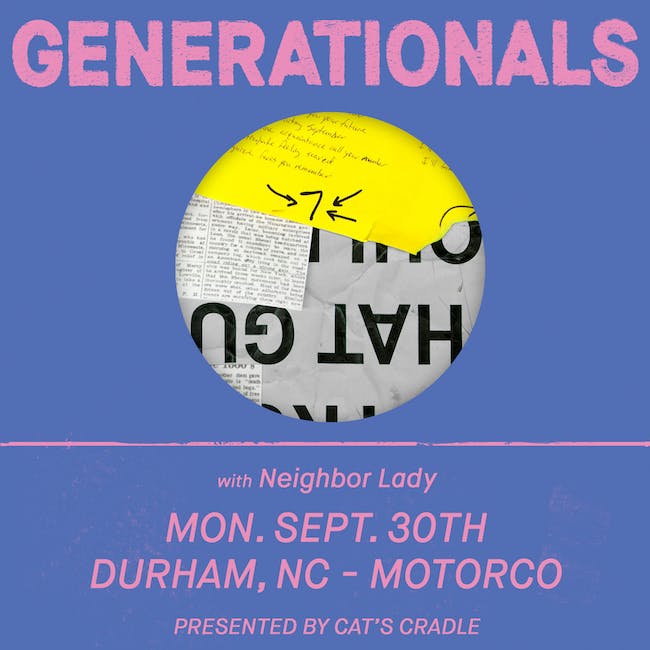 From their inception Generationals have existed at the convergence of classic style andcontemporary technique. Students of an analog school actualized in a digital medium, GrantWidmer and Ted Joyner have always felt most comfortable reveling in this juxtaposition.

Grounded in a catalog of infectious pop hooks that feel both familiar and radically new all atonce, Generationals mastered their distinct voice as a means to widen the path before them.

Reader As Detective , their new full-length album, weds vintage pop canon and modern pop production in a way this duo has proven incomparably adept. From the cornerstone sample of “I Turned My Back on the Written Word,” (a recontextualization of an unreleased b-side) to the playful synths & stuttered drums of “Dream Box,” and jogging rhythms of "Breaking Your Silence," Generationals continue to push the envelope by playing by their own rules.

In the years following their last album, Alix , the band experimented by releasing one-off singles and videos immediately upon their completion, which eventually formed 2018’s State Dogs collection. This method – an exploratory dive in shirking the nature of traditional album rollouts – refined how they approached writing. Freed from the album-cycle mentality, the pair was able to focus on each track autonomously, rather than as a fragment of a larger batch of songs.

Reader As Detective is the result of purposeful time spent honing Generationals’ craft as progressive songwriters. With the help of producer and longtime collaborator Dan Black, they dug into new methods of creation with a fearlessness for experimentation that is equally vital to the experience of both artist and listener. With Reader As Detective , Generationals have reached a high-water mark in an already noteworthy career – isolation and celebration set to a

The missing link between indie-rock and classic country western is Atlanta based Neighbor Lady. Comprised of Emily Braden, Jack Blauvelt, Merideth Hanscom, and Andrew McFarland. Neighbor Lady began as a solo project for Emily Braden, writing music by herself and for herself; lyrically, the songs chronicle events in her personal life and her emotions surrounding those events. After high school, she moved to Athens, Georgia, met guitarist Jack Blauvelt and formed Neighbor Lady, a small band centered on supporting Emily’s songwriting. As Braden puts it, “Neighbor Lady started because I was too nervous to play a show by myself, so I asked my friends to play with me.”

Neighbor Lady’s debut LP “Maybe Later” consists of 7 songs that introduce the band’s foundations of country kissed alt-rock in a poignantly sweet and evocative style- the album shifts fluidly between the dreamy, stripped down, aching melodies of just Braden and her guitar to the powerfully noisy and fiery hooks of the full band. Neighbor Lady’s momentum is indebted to their blend of a powerfully dynamic band paired with Braden’s soaring vocal melodies, creating a sensation both comforting yet heartbreaking in the same moments.

Friendship Fever is happy to close the polarizing gap between here and there with the release of “Maybe Later” on May 11th, 2018.