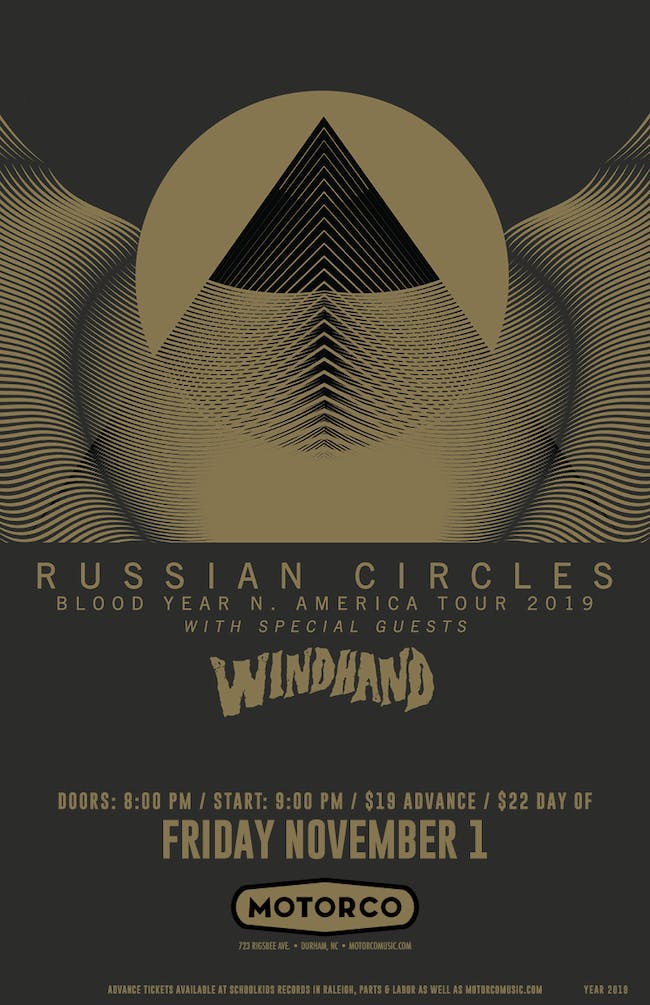 Motorco Music Hall partnered with Lyte to give our fans a way to get official tickets after sell out. All tickets are issued by our ticketing provider, Eventbrite. CLICK HERE for OFFICIAL TICKET EXCHANGE

Perhaps the most immediately apparent characteristic of the fifth Russian Circles album, Memorial is its wide range of emotion. Vacillating from somber-yet-soaring melodies on one track to pummeling metal heft on the next, Memorial sounds like an album with split personalities.

Where one song showcases guitarist Mike Sullivan, drummer Dave Turncrantz and bassist/keyboardist Brian Cook's mastery of lush melancholic melody, the next exhibits their most abrasive underground metal leaning sound, with washed-out 16th-note riffs and crushing rhythms. The band's penchant for endless hooks remains a constant, but Memorial embodies their most dramatic ranges in tone.

"We've always tried to balance our metal-influenced sounds with more nuanced, pretty, orchestral elements," Cook says. "But this time, it's far more polarized in that the heavy parts are much more blown out and exaggerated while the pretty moments are far more restrained, delicate, and atmospheric." In the two years since Russian Circles released their landmark fourth album Empros, the Chicago trio toured worldwide nearly incessantly, encountering many heavy acts whose music seemed needlessly complicated. "We set out to make a straightforward, intense, heavy record," Cook explains. "We subconsciously gravitated toward darker and more somber sounds. We wanted to get away from the overtly flashy."

In search of such a streamlined sound, the trio focused on each individual song having its own emotional and musical characteristics. As such, Memorial almost feels like stages of grief. That notion might be aided by 1) the album's clever structuring, in which it ends in the same place as it starts, and 2) special guest vocalist Chelsea Wolfe lending her hauntingly somber vocals to the album closing title track.

To a degree, the monolithic, juxtaposed moods on Memorial is the band's reaction to the proliferation of iPod culture affecting how bands write music. Today, most musicians are trying to mash together disparate elements with results sounding as unpalatable as cooking a meal blindfolded. Russian Circles wisely and deftly sidestep the trappings of genre amalgamation. "I want to hear a band with a broad palette," Cook says. "But it should find that weird balance with breadth and width. We wanted to make a record with more extreme peaks and valleys. I'm hoping that we can get away with making a schizophrenic record."

Those extremes are no more perfectly exemplified than on album opener "Memoriam", which leads in with delicately plucked guitar notes and synth haze hovering in the background, vaguely reminiscent of Pink Floyd's Wish You Were Here album. But the mood abruptly ruptures as the next song, "Deficit" forcefully kicks in with a wall of vicious, treble-bleached guitars blaring over Turncrantz's half-time rhythm pummeling his drums with the sound of an industrial machine re-fabricating raw materials. Tension builds to a breaking point about halfway through, opening into a skull-thwacking chugging riff that becomes the foundation for multiple mutant variations slithering over the top. "1777" is possibly Russian Circles' most epic and perfectly streamlined song of all time, incorporating both the physical dynamics of the studio in its sound—much like David Bowie's emotive vocals on "Heroes", but instead with drum beats and guitars jutting outward in dramatic fashion—while also developing a slow-burn build of elements purely focused on the emotional specificity of the song. Elsewhere, the uplifting melody of "Ethel" features a chiming finger-tapping guitar line that's heavily treated with effects making it sound like a vintage synth laid over powerfully expressive drums and distorted bass notes cascading over the proceedings with the forceful cadence of a lead vocalist. Album closing title track, "Memorial" is a plaintive, somber ballad featuring Wolfe's guest vocals. A hazy version of the album opening guitar notes hang in the distance as Wolfe's reverb-soaked voice hovers above the dreamlike melody somewhat reminiscent of Julee Cruise's Twin Peaks theme song.

Memorial was recorded at the illustrious Electrical Audio studio in Chicago with the band's longtime producer Brandon Curtis of The Secret Machines & Interpol who also helmed the band's two previous albums, Empros and Geneva. Memorial will be available on LP, CD and download via Sargent House on October 29th, 2013.

For a band who traffic in measured, unhurried riffage, Richmond's WINDHAND have moved awfully quickly over the last few years. Founded in 2009, the VA quintet have been making waves since the release of their 2010 practice space demo, a two-track CD that garnered the band comparisons to artists like Electric Wizard, The Devil's Blood, and Black Sabbath. That auspicious start was further realized in March 2012 when the band released their self-titled debut, which quickly became an underground hit and sold out of multiple vinyl presses in a matter of months.

A year later, the band officially signed to Relapse Records. After a steady touring schedule, the band collaborated with Richmond brethren Cough on a split entitled Reflection of the Negative, which was released on Relapse in April 2013. Pitchfork deemed the split WINDHAND's "best music to date," and the record's positive critical reception helped pave the way for WINDHAND to release the highly anticipated album Soma in September 2013. Stereogum, Spin, and the LA Weekly featured Soma prominently on their overall best-of lists. The album was heavily represented in countless metal publications including Revolver, Invisible Oranges, MetalSucks, and Metal Injection. Rolling Stone, NPR, and Pitchfork all took note of Soma as well; the former considered the album the third-best metal release of 2013.

Soma was no flash-in-the-pan internet phenomenon. In 2013 and 2014, the band embarked on a series of support and headlining tours across North America, Europe, and Australia, sharing the stage with the likes of Sleep, High on Fire, Dead Meadow and Kvelertak. In addition, WINDHAND appeared at major festivals including Roadburn, SXSW, Scion Rock Fest, Day of the Shred and Maryland Deathfest. WINDHAND also took the time in October 2014 to follow up Soma with a brief two-track Halloween split alongside Swedish doomsters Salem's Pot (released on Riding Easy Records). Noisey liked the record so much that they declared the band "must have definitely sold their souls for their new split."

WINDHAND returned in 2015 with their third full-length, Grief's Infernal Flower, a multifaceted slab of thundering stoner doom that Noisey has called "doom metal's most anticipated album of the year." Produced by Jack Endino (Nirvana, High On Fire, Soundgarden, etc), Grief's Infernal Flower is massive, heavy, and personal, a modern testament to the power of doom and stoner metal's legacies. One sees the urgency the band have displayed over their career reflected in their music – long-canonized tropes are reimagined and reinvented, WINDHAND convey an irrepressible sense of motion even within the slowest of songs. Front woman Dorthia Cottrell firmly establishes herself as one of the best vocalists of the genre by perfectly balancing beauty with enormous power, and the twin-guitar attack of Garrett Morris and Asechiah Bogdan weaves together nine songs of perfect riffs and fuzzed-out bliss. That often-delicate splendor is all tempered by the colossal rhythmic mastery of bassist Parker Chandler and drummer Ryan Wolfe, whose lower-register expertise serves as the backbone of the new record. Though the first two WINDHAND albums were underground classics, Grief's Infernal Flower stands to see WINDHAND cementing themselves as one of the premier metal bands of our time.