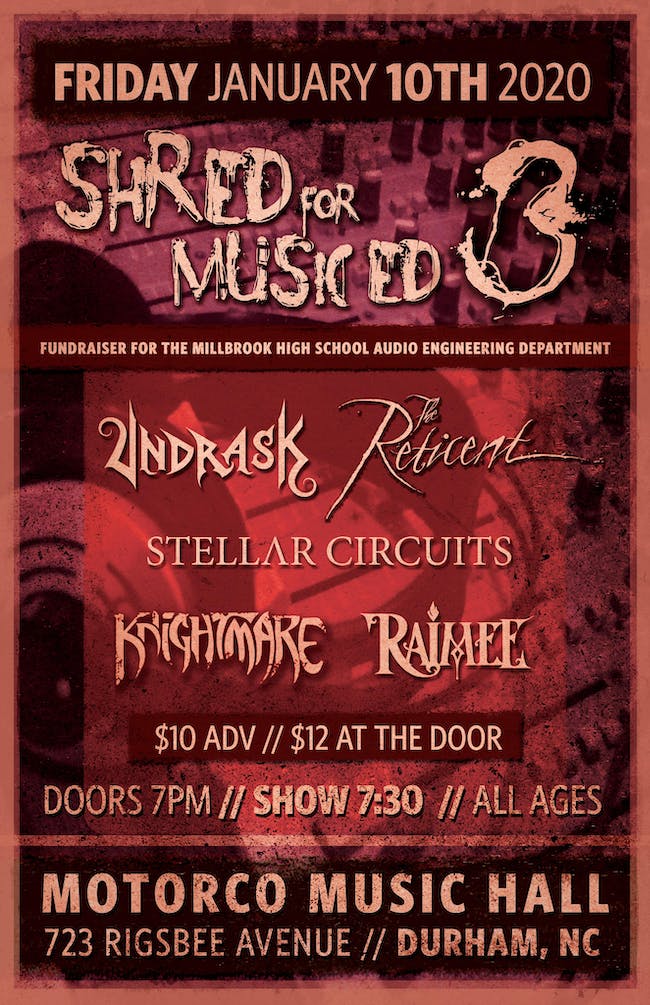 Undrask formed in August 2013 with the goal of creating equal parts tasty and heavy melodic death metal. Inspired by metal of all flavors, our debut EP offers a sample of our special brew - a dash of brutal, a heap of melody, a bit of groove, and a whole lot of metal.

The Reticent began as a despondent side project for Chris Hathcock while he was drumming for Magick Records' Wehrwolfe and the lesser known blackened death metal group The Torture Cell. In 2006, Hathcock recorded off and on in a homespun bedroom recording setup to create the pieces that would be released as "Hymns for the Dejected". The album was only moderately pushed and promoted at shows featuring Hathcock's other bands but it went far enough to garner the attention of Heaven & Hell Records.

After some deliberation, The Reticent signed with Heaven & Hell Records in 2008 and set about the task of recording a follow-up to "Hymns". This record was to be helmed at Osceola Studios. Out of those two days of recording came "Amor Mortem Mei Erit". Not soon after the album's release, Hathcock's other bands (Wehrwolfe and The Torture Cell) had decided to call it quits. With time on his hands, he struck out as a veritable one-man show on what H&H Records had dubbed the "Lonely Hearts Tour" (it did occur in February of 2009) which was a short run of dates to more and more receptive crowds. As more people began to pick up the album and some reviews began popping up, things seemed to be looking up for the band.

However, late in 2009, due to many personal conflicts, Hathcock had decided to stop doing The Reticent all together. And so, a year was taken off where sight nor sound came from the project.

During this hiatus, Hathcock had found he was unable to stop writing. Having his more metal focused bands removed from his life as well as the somber acoustic style emblematic of The Reticent's first two releases, he found himself irrepressibly needing to write and to play. It was then he put together a new live band and began putting material together for a new album.

With a renewed vigor, Hathcock once again revisited Osceola Studios to record "Le Temps Detruit Tout" which would then be released through Heaven & Hell Records in 2012. This time around the album reflected a change in direction as The Reticent's sound started to progress into new territories. The band's popular original tune "Silence" would appear on the record along with what is arguably the most significantly listened to track - Hathcock's unique version of REM's "Losing My Religion".

As the stage show got more elaborate and included more sophisticated edited films, crowds seemed to enjoy getting lost in the new directions the band was headed in. A tumultuous time then struck between 2013-2015 where guitarists were changed 3 times as were drummers. A consistent lineup was getting hard to maintain until 2015 when the band finally felt secure.

In 2015, Hathcock had decided to embark on something he had been working on in various ways for nearly 10 years. A concept album that would recount a traumatic personal tragedy and hopefully bring about some closure to its author. Going even further out on an emotional limb and wanting to explore even more styles and nuances than before, Hathcock knew that a change not only in compositional approach but studio and producer were necessary. To bring this intensely emotional story to life, he drew upon everything from death metal to classic rock to swing to prog to noise and even more. So Hathcock reached out to producer Jamie King, who had produced other eclectic/experimental projects such as Between The Buried And Me, to help him achieve this vision. After a successful Kickstarter campaign, Hathcock was able to self-finance the recording of "On The Eve Of A Goodbye". Unlike anything The Reticent has ever recorded before, the album was simultaneously more aggressive and more anguished than anything previously released. The album finally completed at the tail end of 2015 is now due out for release in October 2016.

And then story is going to get even more interesting...

STELLAR CIRCUITS formed in 2015 with the idea of creating progressively-minded music that resonates with the masses. The name “Stellar Circuits” is derived from the eight-circuit model of consciousness, a theory proposed in the 1970’s about expanding consciousness and understanding the process of our mind as it pertains to existentialism. Although the music revolves heavily around introspection and self-reflection, this is also coupled with the importance of aesthetics and groove. Creating music both intellectual and visceral, STELLAR CIRCUITS is nothing short of a vehicle – transporting the listener to places both chaotic and cathartic.

The North Carolina “Young Guns” of metal! Formed in the early 2000s by 3 best friends with a strong desire to keep the faith. Knightmare plays all over the Carolinas and continental United States bringing a vintage power metal sound with a new age twist to listeners far and wide. A dual lead guitar attack, accompanied by 4 part vocal harmonies, tasteful bass lines, and a melodic style of drumming makes for an enjoyable and powerful performance that brings lovers of rock and roll and heavy metal together for a glorious splendor of musicality and good times.

Raimee is a Melodic Hard Rock/Metal band from Greensboro, NC. They have been honored to share the stage with such national acts as Saving Abel, Red Jumpsuit Apparatus, A Skylit Drive, New Years Day, Eyes Set to Kill, Get Scared, Your Chance to Die, and Lacey Sturm of Flyleaf.