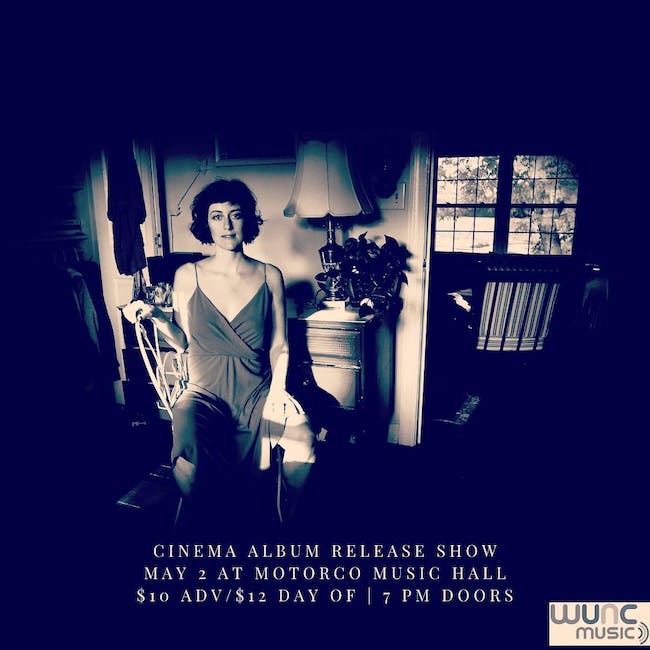 With her luminous voice and captivating songcraft, Durham, North Carolina-based singer/songwriter/multi-instrumentalist Skylar Gudasz delivers a new album, Cinema, recorded between the famed April Base in Eau Claire, WI, with Grammy-nominated producer Brad Cook (Bon Iver, The National, The War on Drugs, Waxahatchee) and in secret studios across the lush forests of the rich NC music scene with Jeff Crawford (Daughter of Swords), Ari Picker (Dante High, Lost in the Trees) and Missy Thangs (the Love Language). This is the follow-up to her full-length debut Oleander (a 2016 release, co-produced by Chris Stamey, that prompted The Bitter Southerner to praise her as “the Joni Mitchell the South never had”).

With this new album, Cinema, Gudasz made a record that is at once intimate and inviting, a collection intended to sate both creator and consumer, and one that reveals a new dynamic dimension of her artistry. Explorations of the sweet, the sardonic, the sultry and the spiritual ring through, like echoes of Leonard Cohen, as she muses on the drama and performance of identity and reality; of life, love, and death. The string and synth decorated arrangements center elements signature to Gudasz’s sound—her melodic ingenuity, intricate guitar and piano work, and hypnotic vocal presence—but bring in a gritty vitality and groove-driven energy previously unglimpsed in her music. With unforgettable lyrics showing the stark power of her poetry (e.g., “I’m as nice as a guillotine” in Play Nice, or “I rode your motorcycle, I recall each turn we took / your back against my body, your waist inside the crook / of my arm, the only anchor, oh, the steel, the wheels / on the altar of the pavement where my blood signed the deal” in Rider), an edgier sensibility echoes the album’s emotional core.

Growing up with a musical family in Ashland, Virginia, Gudasz first found her affinity for music by learning to play flute at age five, and soon started writing songs of her own. She later taught herself to play piano and guitar, drawing inspiration from Joni Mitchell’s use of alternate tunings in developing her own distinct style. Although she spent time in folk and rock bands after heading to North Carolina for college, Gudasz has continued to strike off on her own with her lushly textured, sculpted singular sound. Recently, she released a cover of the beloved “Wichita Lineman” to international acclaim.

Gudasz has won the admiration of some of the most distinguished artists in music. In the past few years, Gudasz has shared stages with the likes of Ray Davies, Cat Power and Sharon Van Etten as part of the Big Star’s Third tribute concerts, opened for Television and toured from the US with Teenage Fanclub to Europe with the Mountain Goats, and appeared as a background vocalist on albums by Superchunk and Hiss Golden Messenger, making her TV debut with the latter on Late Night with Seth Meyers.