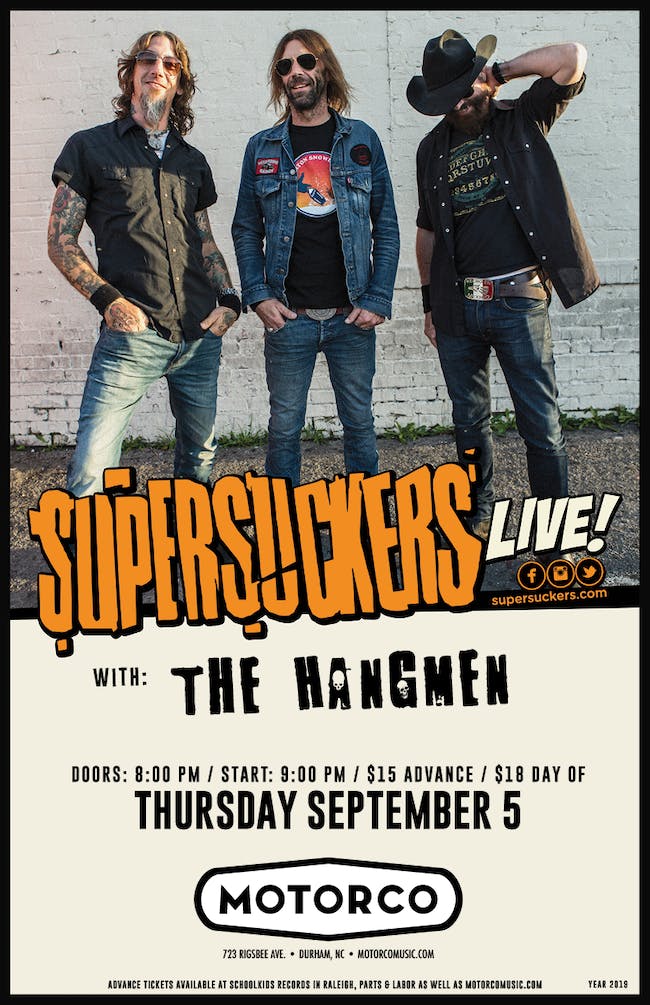 American rock band, formed in November 1988 as The Black Supersuckers in Tucson, Arizona.

"There is something in the honest, no bullshit style of Johnny Cash or Merle Haggard in Small's songs. This dose of reality sets The Hangmen apart from what passes as rockin' these days." L.A. Weekly

“A cross between what the Pontiac Bros. actually sounded like and what Gun Club worshipping critic geeks tried to make everyone think they were – for anyone who isn’t clear on that statement – the Hangmen come out as the winner by far in that comparison” Carbon 14

For the last 30 years Bryan Small led The Hangmen through more shit than you can imagine –from big money major label record deals to debilitating drug addiction and well… too many other demons to mention. Through it all, Small’s commitment to musical honesty and integrity never waned.

Born in Montana, raised in Boise, ID, Small, moved to Los Angeles in 1986 and formed The Hangmen who immediately caught the eye of Black Flag/Circle Jerks singer, Keith Morris who produced demos and managed the band. They signed a deal with Capitol Records and released

their self-titled debut (produced by Vic Maile, Motorhead), but things soon came crashing down. Aswitch to DGC Records (the newly formed subsidiary of Geffen who’s roster included The Nymphs, Nirvana, etc) it seemed like the perfect landing spot for the band. Unfortunately the Rob Younger(Radio Birdman) produced album Suicide Doors was never released and the band dissolved into addiction.

Not one to be down for long, a newly sober Small started writing again, the result was 2000’s Metallic I.O.U. Tours with longtime fans Social Distortion and the Supersuckers followed, including a stint where Small played guitar for S.D. while Mike Ness nursed a broken arm. Ness would laterproduce The Hangmen’s 2007 release In the City.

“I totally feel like we're kindred spirits,” Small says looking back, adding that both bands emphasize “simplicity, and doing what you do and staying true to that.” Small and Ness even wound up blending their songwriting talents on “Train,” something that Small probably wouldn’t have considered with anyone else. “I don’t write with other people,” he says. “It was really hard for me because I want to be in control of everything.”

2019 will mark the release of the Cactusville EP and another chapter of The Hangmen’s legend continues. Small has taken his brand of songwriting to another level, putting him in an artistic class with the likes of Tom Petty and Neil Young as purveyors of the honest and simple.