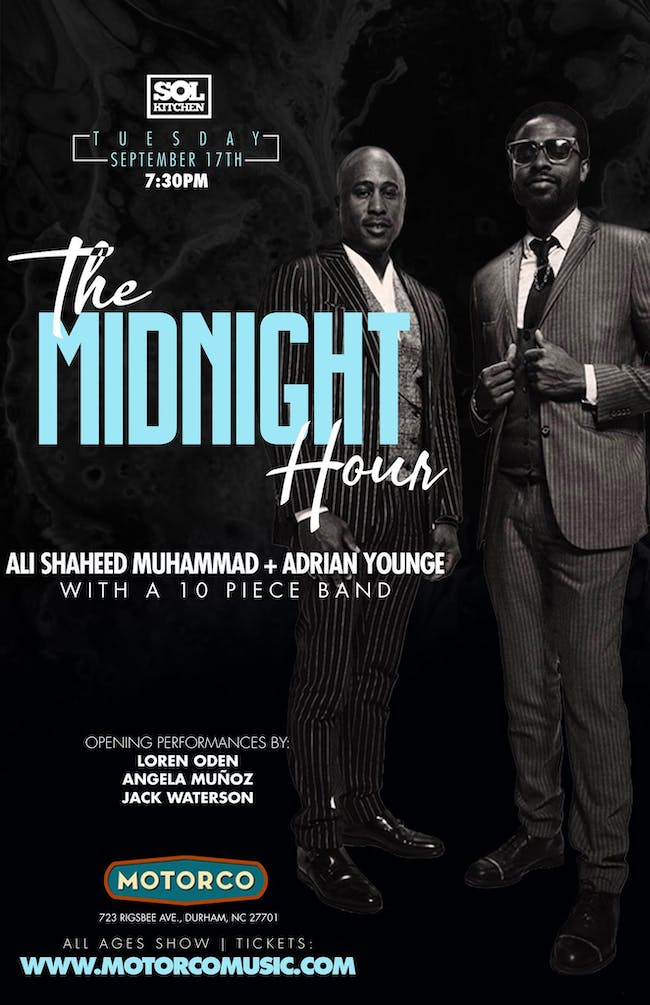 The Midnight Hour is Black excellence: an ode to the cultural sophistication that the Harlem Renaissance established for its people. The Midnight Hour is comprised of Ali Shaheed Muhammad and Adrian Younge, alongside a tight rhythm section and a full orchestra.

Last June, 2018, The Midnight Hour debuted their self-titled album to great reviews and toured the US extensively. “It was during that tour last year that we decided to record a live album, capturing this new experience. The music you hear in our studio album is how we mean it to sound. But it’s something totally different when we have an audience in front of us. This recording is us wanting to give people a chance to hear what they can expect when they see us live.” On February 22nd, 2019, The Midnight Hour performed in front of a live studio audience at Linear Labs. This was a direct-to-analog tape recording that 200 very lucky fans were a part of.

Adrian and Ali began working on the debut Midnight Hour album in 2013, but put the project aside as they would score the hit Netflix series Marvel’s Luke Cage. The Midnight Hour is a soul/jazz/hip hop album which continues the conversations started by yesterday’s jazz and funk pioneers; those that created the bedrock of samples for hip hop producers in the 80s/90s. The Midnight Hour is sophisticated hip hop that fans will enjoy, capturing their jazz rhythm section, and a full orchestra reminiscent of the maestros such as David Axelrod and Quincy Jones.

Ali Shaheed Muhammad was born and raised in Bedford-Stuyvesant, Brooklyn. At an early age, Ali became fascinated with music. His earliest memory of this fascination was toting around a yellow Mickey Mouse transistor radio he received as a gift. "I brought that with me everywhere; I was comforted by the sounds that came from that little box," he says. Other memories lead to house parties his mother would throw where his Uncle Mike would deejay. It was at one of these parties that the then eight-year-old Ali took control of the mixer and turntables and began his life long musical journey. Ali went from local neighborhood deejay to a world-renowned producer and musician, forming not one but two popular bands.

Ali also co-founded a super trio named "Lucy Pearl" with band members Dawn Robinson and Raphael Saadiq, where he was able to explore more of his music abilities. Lucy Pearl fused funk, rock, R&B and hip-hop bringing a new energy and sound the the scene.

Ali is also a 4-time Grammy nominee -- twice with A Tribe Called Quest, once for works with D’Angelo, and once for Lucy Pearl. With plenty of production credits, no Grammy wins and two defunct groups, what is left for the DJ with plenty more music in his soul?