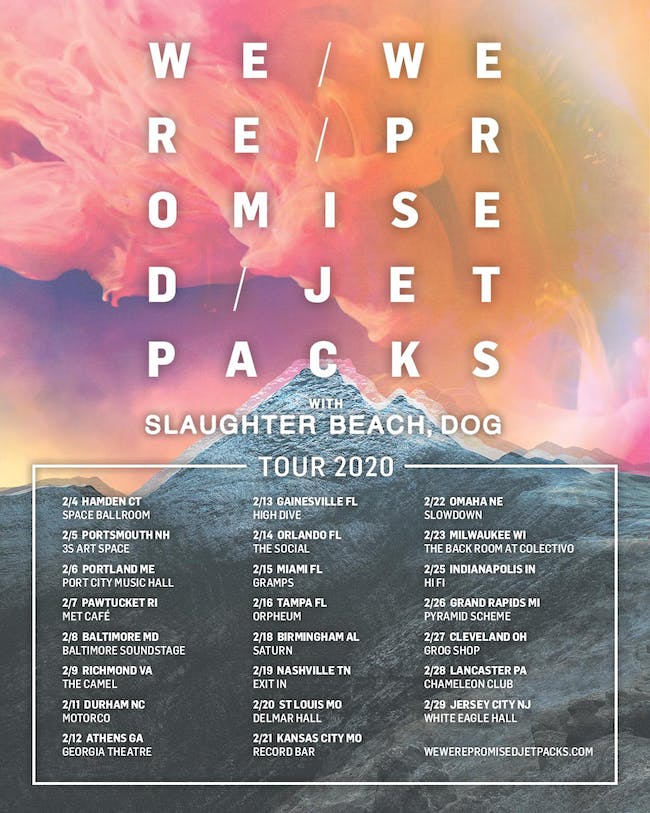 We Were Promised Jetpacks.

WE WERE PROMISED JETPACKS

Sometimes you have to go back to basics in order to find yourself again. This is something Scottish rock band We Were Promised Jetpacks realized over the course of creating their fourth full-length album, The More I Sleep The Less I Dream.

After the musicians finished touring 2014’s Unravelling, they decamped home to Scotland and took a breath. They reverted to their original four members and dealt with several behind the scenes changes. They celebrated a few marriages and tried to remember who they were when not on the road. A decision was made. No more touring until a new album had been written.

It wasn’t until early 2018 that they finally felt they had a collection of songs they were proud of. But only after taking a few wrong turns along the way.

“The first batch of songs were written for the wrong reason,” Mike says. “We put a lot of pressure on ourselves and ended up writing a certain kind of song. Focusing more on choruses and structure, trying to simplify everything.”

“We scrapped probably a full album,” Adam adds. “Something just felt off about them. They didn’t work at all.” So, they regrouped. Instead of focusing on external expectations, they decided to write for themselves. To write songs that made them happy.

“The More I Sleep, The Less I Dream” was one of the first songs to help shift the band in the right direction. It didn’t take long to write with all members quickly connecting with its darker vibe. “All of the songs we scrapped were very calculated, whereas this song just flowed. It was instinctive. That gave us the confidence to believe that we could actually do this, just the four of us,” Mike notes. “After that everything else just clicked.”

“I’m glad we got that out of our system.” Adam says. “A lot of the songs on the album are a reaction to that. We wouldn’t have arrived at them without going the wrong way first.”

From there, they focused on making sure each song was fully realized before even thinking about studios or recording. After meeting up regularly and writing constantly at their rehearsal space in Leith, Edinburgh for two years, the band made sure they knew all of their songs inside out. Every single detail of everyone’s parts poured over, refined, built on. “We didn’t want to fall back on studio tricks or extra sounds,” Mike says. “If it wasn’t right in the room, then it wasn’t right. If a section needed to sound bigger we’d have to find a way to make it sound bigger live in the room. No excuses.”

The musicians connected with producer Jonathan Low (The National, Sufjan Stevens, Kurt Vile, The War on Drugs) and were inspired by his approach to their vision and his grounded style. After making their prior albums in England, Scotland and Iceland, it felt like a good opportunity to try crafting songs in the U.S. The album was recorded over the course of five weeks at Minor Street in Philadelphia and Long Pond in New York’s Hudson Valley in early 2018. The preparation turned out to be essential, helping the musicians keep each song simple and minimal. “Jon was totally onboard with us only adding things that underlined what we wrote together in the rehearsal space. We wanted it to sound like it was alive and he really helped us realize that” Adam says.

Lyrically, The More I Sleep The Less I Dream reflects a group of people who have grown up since they first emerged on the scene with These Four Walls in 2009. During the making of this album all four members turned 30, and felt like vastly different people to the four 20-year-olds that they were when they first started releasing music. Concepts of miscommunication and self-doubt thread throughout the songs, beginning with the surge of the album’s opening track “Impossible”, carrying through to the emotionally wrought, slow-burner “Hanging In”, and onwards to the relentless drive of “Repeating Patterns” and the menacing album closer “The More I Sleep, The Less I Dream.”

“The album is so much about us going back to our basics and relying on our instincts.” Mike says. “There’s a range of songs that span everything we do as a band, and we’re the connection between them. It feels like this album is us.”

The More I Sleep The Less I Dream marks a new chapter in We Were Promised Jetpacks’ career. It’s about going back to the heart of who they are, a high school band that never stopped. It’s about four people who have grown up together, making a conscious choice to keep writing music and seeing where that takes them.

Sometimes you must go back to basics in order to find yourself again. But once you have, then what? It’s one thing to say you want to take a step forward, it’s a much more daunting prospect actually doing so. The More I Sleep The Less I Dream contains the essence of what the band have grown into, both as artists and as people. They’ve taken their experiences, both from their ten years as a touring band and from the changes in their personal lives and forged them into an album that represents a new phase for the band.

Across the previous Slaughter Beach, Dog albums, Jake Ewald has crafted a specific sound. It’s one that incorporates pop music, indie-rock, folk, and just the faintest dash of punk in order to create something that’s accessible but still artistically rich. With Safe And Also No Fear, the band’s third album, Ewald has abandoned his usual practices in service of creating something that, try as one might, isn’t so easy to describe.

In the wake of 2017’s Birdie, an album awash in warm tones and bubbly pop hooks, Safe And Also No Fear can’t help but feel like a turn toward darkness. It’s not one that’s instigated by the outside world—as inescapable as it may be—but instead the dramatic shifts of a person’s interior life. Where Ewald once offered tightly woven vignettes about characters that mirrored the people in his life, Safe And Also No Fear finds him naked at the album’s center, questioning everything he knows about himself. Around him, bassist Ian Farmer, guitarist Nick Harris, and drummer Zack Robbins spin out songs that are dense, swirling amalgams of difficult questions and hard-earned realizations—the kind that can’t be expressed through the accepted structures of pop music.

This isn’t to say there aren’t hooks, as songs like “Good Ones” and “One Day” have effervescent melodies anchoring them, but Safe And Also No Fear generally avoids taking the clear-cut path. As Ewald tells it, that’s a horrifying thing to put out into the world. After putting the finishing touches on the album, he sat down and listened back to the demos he’d first made, then the album itself, and realized it sounded unlike anything he’d ever done before. His creative impulses had changed over the years, and the result was a record that maybe his followers wouldn’t actually like.

Ewald seemingly addresses this anxiety during the album’s most ambitious track, the seven-minute long “Black Oak.” It’s fitting that midway through the longest song Ewald has ever written he offhandedly remarks, “Realizing this may put my career on the line.” It’s part of a larger narrative, but one that’s more textural and ambiguous than what the band has been known for. Is that lyric about Ewald and Slaughter Beach, Dog? We’ll maybe never know—and that’s the beauty of Safe And Also No Fear. It’s an album so profoundly singular, one that sees the band willing to wade out into deep waters without a life vest, that it encourages you to go out there with it. You hear the band fully embrace the unknown at the end of “Black Oak,” when the song explodes open and Ewald’s vocals are looped into a refrain that’s haunting and impossible to sing along with accurately. You can pick out phrases and hum a melody, but there’s no didactic meaning behind it. It’s there for you to find if you need it.

Safe And Also No Fear is a bold gesture, not just because of the music contained therein, but because it required Ewald to interrogate his artistic tendencies, breaking himself of his habits in service of making something he never thought he could. That involved trusting his band, with whom Ewald collaborated for a full year of writing and recording. Unlike Birdie, where Ewald played every instrument, with Safe And Also No Fear everyone’s fingerprints are on it. Though the album is a product of Ewald committing to his vision, it’s also proof of the way that Farmer, Harris, and Robbins are able to expand Slaughter Beach, Dog’s sonic boundaries in subtle, evocative ways.

The result of that collaboration is Safe And Also No Fear, an album that doesn’t leave easy clues as to its influences or intentions, instead offering up vague sketches of what it feels like to be a person who is constantly confused and anxious, yet completely committed to finding a way through it. It’s not simple, and Ewald’s never didactic, but the message begins to come through the more you revisit it. Every part of Safe And Also No Fear is a risk, and that’s exactly what makes it so beautiful. It’s a record that sees a band fully committed to their art, in spite of what everyone else would advise. And if you’re listening close enough, it really does make a lot of sense. 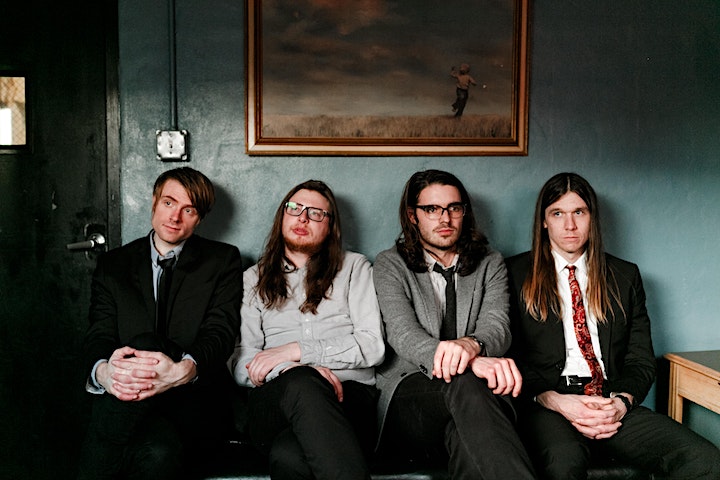